It felt as if he was moving so
much faster than anything around
him as his heart started beating faster and pounding harder then
it had ever before, that's when he
noticed the clock that was hanging up on the wall had either stopped or slowed way down to a crawl  "what was going on," he thought
to himself "Did I finally crack and go insane? is this just a dream?
For that is what it seemed to him
and it all started when she had
walked in to the room, it felt as if
"No, that cannot be" time itself
slowed then stood still, refusing
to move on and even a single grain
of sand in an hourglass on the
desk just kind of hung there, almost like it was floating in the
air, he then looked over at her
and wondered who she was, he had not even a clue, all he knew
was she was the most beautiful
woman he had ever seen  staring
for what seemed like many hours
studying everything about her all
her curves and her gorgeous lips
the color of her eyes and the way  her hair fell over her breast, then he started to realized that he had
fallen in love or maybe already  loved her he was not sure, just
as he heard a weird sound, it was
something like a hissss, humming,
or a murmur and listened intently,
it was two voices coming from within himself, he could hear his
heart and soul whispering "she is
the one who we have been waiting for all this time" and then he heard
other voices begin to speak back
and forth as her heart and soul
started telling all her secrets of
how to find the path to leads to
her heart and the key that opens
the door to her soul who had been
locked away all this time by regret
and sorrow of bad relationships and love that did not last, just as
music begin playing it was now
all around everywhere when their
two hearts started beating as one
together a beautiful symphony
with a melody of love that must have some how caused her to move forward in time as she begin
to smile then reach out grabbing him pulling him closer and hold on
tightly as they both danced slowly
around the room as two their two
souls reminisced about their past
lives together as two made love. 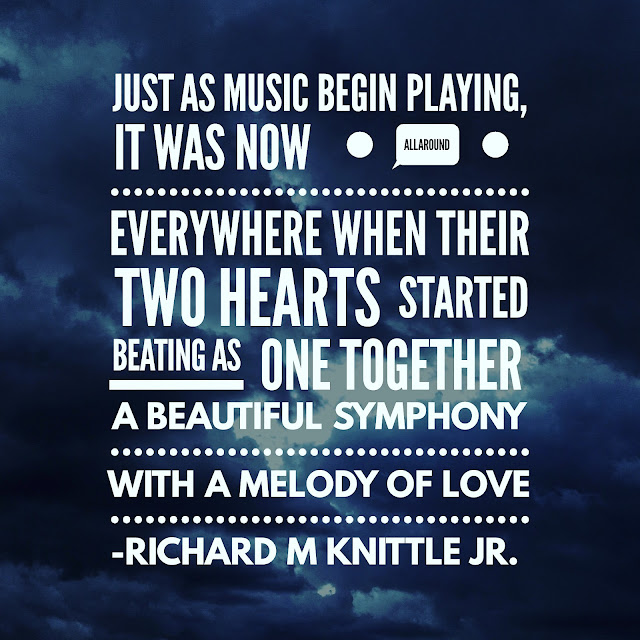 Popular posts from this blog

The song "A Little Southern Comfort" was

The story of yours and mine

January 02, 2020
THE STORY OF YOURS AND MINE.THIS IS ABSOLUTELY A GREAT POEM.IT REMINDS ME OF HOW TRUE LOVE SHOULD BE.I WILL BE WAITING FOR MORE.THANKS FOR SHARING THIS AND MAY GOD BLESS YOU AND YOUR FAMILY.﻿+Doug Barton, its a beautiful poem written from the heart of +Richard M Knittle Jr.. I am grateful to re-share. Wishing you a fantastic Sunday 😃😃😃﻿"The Story of yours and mine"One day on some cold winters
night on a blanket laying with you in front of a fireplace and drinking
a bottle of white wine, I am going to create a brand new masterpiece
for I will write a new Poem about you and I and it will be called the
story of yours and mine. It will
start out with how I gave you a first kiss just on the back of your
neck that I must say caused a
chain reaction that you and I will
not soon ever forget and until all
of the sands run dry in the
hourglass at the ends of time, I
will never in my life regret for the
heat that came from our passion
that came next could only be
compared …
Read more

A song about addiction

Richard M Knittle Jr.
Richard M. Knittle is a Best Selling Author and a Nominated Texas Poet Laureate Nominee with fifteen books to his credit. The darkness of life left him in addiction, sorrow, and misfortune; a path leaving most debilitated. He relentlessly fought his demons empowering himself with understanding and empathy bleeding out in his poetry. Richard's fight for the son, not acknowledged through blood, put this poet in a battle of words . His courage and tenacity blessed him with the right to be the father in his son Ryder's life. The epitome of heroic. Richard is a veteran of two services in the US Navy and US Army National Guard with three honorable discharges. Although, he suffers with clinical depression and PTSD; he uses his struggles to advocate for all veterans. He is not only a poet but a published songwriter. I had the pleasure of being a guest on his radio show Poetry because it matters. His warmth and honest sincerity is very much mirrored his poetic words. He is a treasured friend and inspiration to all who read his poetry and are blessed to know him. Gracie A. Matthews Author and Poet